In the 1960s, the discovery that human cancer cells expressed cell-surface antigens was revolutionary in the development of antibody-based treatments for cancer. The ability to explicitly target tumor cells over healthy tissue, due to those target antigens being overexpressed, mutated or selectively expressed, enables the development of biotherapeutics which can harness the body’s naturally-occurring defense mechanisms to fight against cancerous cells (Rettig & Old, 1989; Scott, et al., 2012).

Over the past 22 years the research and development of biotherapeutics has flourished as  promising therapies for cancer patients, but before any potential monoclonal antibodies reach clinical trials, they must be generated through a complex discovery process (Golay, 2017).

Once the target has been selected and validated, and screening preparation has taken place the next step is to generate the candidate antibodies for lead selection. Current technologies used during this step include hybridomas, phage display, yeast display and the use of transgenic rodents. Each of these technologies have their advantages as well as limitations (Lu, et al., 2012).

The humanization of rodent antibodies generated from hybridoma technology has produced the highest success rate for FDA-approved therapeutic antibodies, however one of the biggest limitations of this technology is the paucity of hit candidates within a large cell population. For example, an antigen-specific, antibody-producing cell can be present at incidences of one in a million or even one in a billion - making the discovery and development of novel biotherapeutics very challenging (Lu, et al., 2012).

Any antibodies generated must be extensively screened to find and isolate the rare antigen-specific, antibody-secreting cells from a population of millions. Initial identification and selection is conventionally carried out using immunoassays in flow cytometry or ELISA. Flow cytometry has the benefit of being able to easily screen many cells in a short time but can be damaging to the cells reducing cell viability after screening. It can also be difficult to accurately measure antibody secretion rates using flow cytometry due to the rapid diffusion of molecules, and usually cells require pre-treatment to prevent the release of antibodies.  After the initial immunoassay for antigen detection, further analysis is conducted to identify specific biochemical features. Once screened and characterized, the positive cells must then be sub-cloned into monoclonal populations using semi-automated technologies such as cell sorting and cell-in-well imagers, overall making the initial screening very low throughput, time consuming and complex (Zhang, 2012). 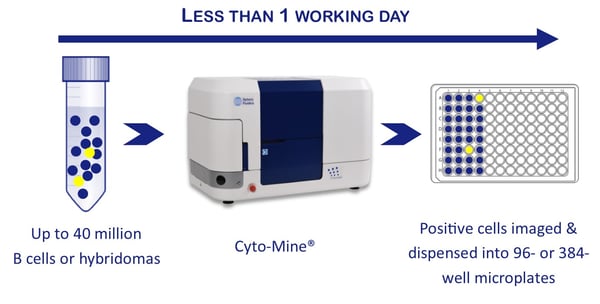 The assay is conducted in picolitre-volume aqueous droplets called ‘picodroplets’. Within the picodroplet antigen-specific antibodies secreted by cells are captured and detected by a Förster Resonance Energy Transfer (FRET) assay, illustrated in Figure 2. The assay uses a pair of fluorescently labelled detection probes; one binding to the Fc region of the target IgG molecule and another to the specific antigen. The pair of detection probes are labelled with FRET donor or acceptor dyes respectively. During incubation at 37oC, the encapsulated cells start to secrete antibodies, allowing the detection probes to then bind to the secreted antigen-specific immunoglobulin, which following optical excitation, can induce a FRET-mediated shift in fluorescence. The fluorescence assay allows the picodroplets to be selectively sorted and the picodroplets containing ‘hit’ antibodies to be dispensed and further analyzed during lead selection. 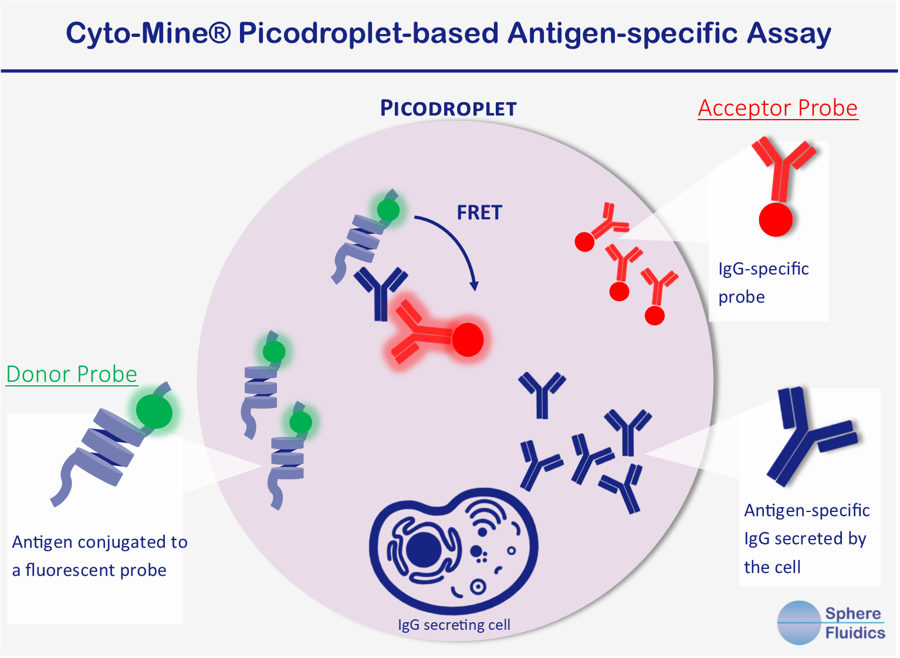 Increasing the Chances of Success

One of the biggest advantages of the picodroplet-based antigen-specific assay is the speed and efficiency of selective cell screening. The miniaturization of the immunoassay and the high-throughput automation of selective cell sorting reduces screening costs by over 10-fold compared to conventional techniques as the assay volume and reagents required within a sample for one run are less than 1 mL.

Cyto-Mine® addresses many of the challenges faced during antibody discovery by offering a robust, fully integrated platform that can deep mine tens of millions of cells increasing the chances of finding that rare cell secreting an antigen-specific antibody. Overall, Cyto-Mine® greatly reduces timelines and increases screening capabilities to accelerate the discovery and development of novel biologics.

Download the application note below to find out how we have applied the antigen-specific assay to isolate rare cells from a hybridoma population.