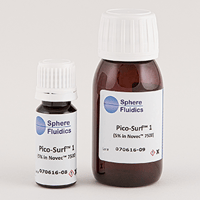 Picodroplet microfluidics is rapidly becoming the technology of choice for high-throughput single cell analysis, providing an easy-to-use tool to isolate single cells in picolitre-volume, water-in-oil droplets (picodroplets), stabilized by a biocompatible surfactant layer. The use of an appropriate surfactant, emulating the function of phospholipid membranes in biological systems, is essential for efficient and robust picodroplet manipulation. This article explores novel multifunctional and biocompatible surfactants that create a uniquely protective environment to support cell viability and integrity during incubation and shield cells against shear stress during subsequent analysis.

Microfluidic systems based on picodroplet technology provide a high-throughput and sensitive method for performing quantitative screening assays at rates unachievable in conventional laboratory workflows (1). By encapsulating single cells in picoliter volume compartments, each picodroplet acts as a miniature ‘test tube’ in which single cells can be stored, incubated, and sorted for target events, then dispensed for further analysis. This picodroplet-based approach offers flexibility in assay design, enabling a broad spectrum of applications, including secreted proteins, isolating rare cells from large populations, improving yields of therapeutic antibodies, and undertaking genome-editing analysis at the single cell level.

The range of applications has expanded alongside improvements in surfactants. Surfactants maintain the stability of emulsions in different experimental conditions and for extended periods of time. When generating a picodroplet, the surfactant molecules rapidly arrange themselves on the surface of the picodroplet, creating a layer to stabilize the water and oil interface and reduce surface tension. The steric repulsion between the two interfacial layers mediated by surfactant molecules prevents aqueous picodroplets from fusing or breaking.

When selecting an appropriate surfactant for single cell analysis, the surfactant must also be non-ionic, providing an inert and biocompatible water-oil interface that allows enhanced gas exchange. Ionic biocompatible surfactants are also available, but they are generally not as good as non-ionic surfactants. The surfactant must also maintain picodroplet stability during elevated temperatures and multistep experimental workflows where picodroplets are stored, reinjected, incubated and undergo various other manipulations.

Novel multifunctional and biocompatible fluorosurfactants have been developed and commercialized to meet these needs. For example, Pico-Surf™, composed of a unique molecular structure and robust fluorophilic moiety/hydrophilic moiety ratio, is a high-quality surfactant that offers several advantages over conventional surfactants (2). In a study testing five different commercially available surfactants, Pico-Surf™ demonstrated the highest picodroplet stability, consistent reliability, stability at high temperatures, and the lowest voltage for sorting. 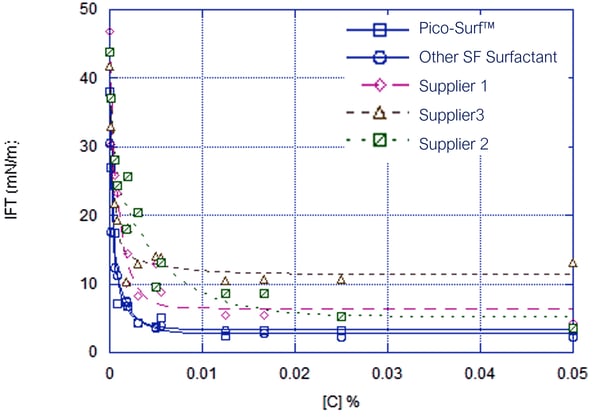 Given the superior performance characteristics of the biocompatible surfactant, researchers can use picodroplets as robust microreactors. Cells are protected in a cell-friendly microscale environment to support cell viability and integrity while undergoing various manipulations. Pico- Surf™ generates picodroplets that are stable for many days and promote high gas exchange rates, which maximizes cell viability. In a study demonstrating that cells in surfactant stabilized picodroplets can be cultured for prolonged periods, the findings show that depending on the cell line, cells can be tested, retrieved, and seeded for clone outgrowth after up to 72 hours in 450pL volume surfactant stabilized picodroplets.

In the experiment shown in Figure 3, seven different cell lines were tested as models for both suspension and adherent cells. The cells at an Input cell concentration of 2 x 105 cell/ml were suspended in culture medium and encapsulated in 450 pL picodroplets using Pico- Surf™ surfactant. Cell outgrowth was analyzed at four different time points: after cell encapsulation (time 0) and after 24, 48, and 72 hours. These experiments demonstrated that, following encapsulation in picodroplets and incubation for up to 72 hours, cells still have the capability of growing and creating clonal populations, and if larger volume picodroplets are used, longer periods of incubation without decrease in cell viabilities can be achieved.

Figure 3. Analysis of cell outgrowth after encapsulation in surfactant-stabilized picodroplets

This article showcases Pico-Surf™,  a high-performing biocompatible surfactant for picodroplet generation.  Using the surfactant, researchers can consistently form surfactant stabilized picodroplets that are stable for many days and promote high gas exchange rates, which maximizes cell viability. The surfactant is robust and reliable, stabilizing picodroplets and their cellular or molecular contents over a wide range of temperature and biological conditions, allowing researchers to bypass issues with stability when undertaking multistep experimental procedures.