10 years since the launch of Sphere Fluidics

An interview with Professor Chris Abell, Pro-Vice Chancellor for Research, and Professor of Biological Chemistry at the University of Cambridge. 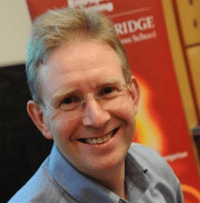 Since being founded in 2010, Sphere Fluidics has become a leading provider of automated single cell analysis systems for scientific research, drug development, and precision medicine. But how did it all begin?

To learn more, we spoke with Professor Chris Abell, Pro-Vice Chancellor for Research, and Professor of Biological Chemistry at the University of Cambridge, and a co-founder and Scientific Advisory Board member of Sphere Fluidics. In this article, Professor Abell discusses the development of Cyto-Mine® – the first integrated benchtop system for the rapid screening and characterization of single cells. We also explore novel applications for droplet-based microfluidic technology and the ongoing developments taking place at Sphere Fluidics.

Researchers raised the idea of single cell isolation in droplets in the 1950s. Yet, only in the last decade has this field of study become a commercial reality, and for good reasons. The targeted analysis of single cells in droplets is challenging and raises several biological and technical issues. Until recently, researchers have often sorted 10% of the sample from the other 90%, rather than studying at the single cell or single molecule level.

To improve issues such as single cell encapsulation efficiency, accuracy, throughput, and quantitative measurement, scientists have carried out extensive proof-of-principle experiments, including many in the department of Chemistry at the University of Cambridge. These novel microdroplet-based experiments, combined with developments in technology and the growing interest in single cell analysis, have inspired a series of remarkable breakthroughs to bring us to where we are today.

Building upon our research at Cambridge, Professor Wilhelm Huck and I formed Sphere Fluidics in 2010. In the very early days of Sphere Fluidics, when working with companies that expressed interest in droplet technology, we would go to the company and build a complex rig using multiple pieces of delicate equipment. This rig would provide them with a research-level instrument, repeating what we did in the lab. However, we ultimately aimed to offer a robust, automated commercial platform to integrate single cell encapsulation, incubation, fluorescence detection, sorting, imaging and dispensing into one instrument. This aspiration was manifested in the launch of Cyto-Mine®. 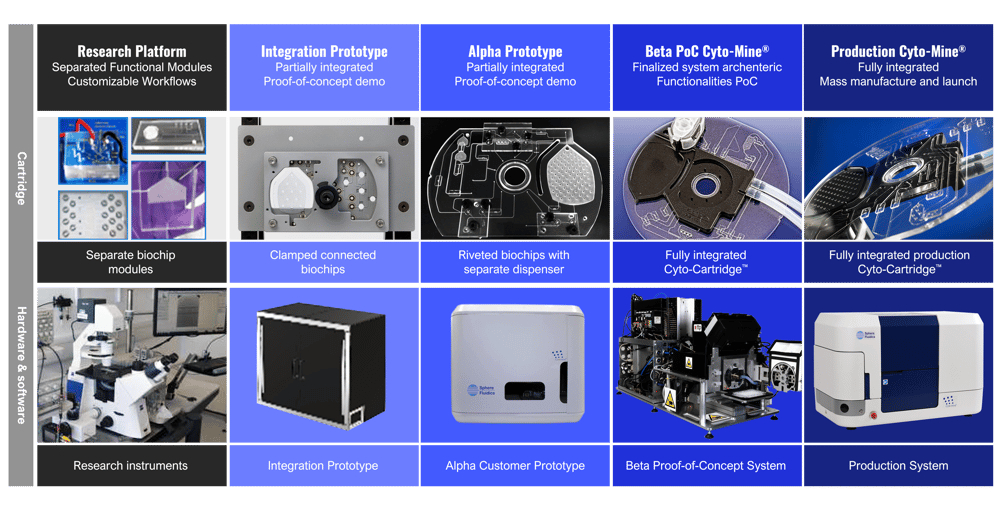 Using Cyto-Mine®, researchers no longer need to optimize an array of delicate and complex research instruments. They simply load a cartridge into Cyto-Mine®, press a button, and receive their results using single cell analysis software. This standard of integration is a massive technical achievement by the company and the companies who helped us develop this platform. Not only does the integrated system help to streamline workflows and accelerate R&D timelines, but it fundamentally changes the accessibility of droplet-based microfluidics. By moving from a set of instruments that require specialist expertise to a single instrument that a competent technician can manage,Cyto-Mine® brings massive technical capability to any R&D department that easily integrates into their current workflows, from universities to government, to industrial laboratories. Sphere Fluidics provides the installation and technical support to help researchers get up and running in within two days.

Cyto-Mine® has been specified to a very high standard to outperform traditional approaches in terms of speed, precision, and accuracy. Subsequently, Cyto-Mine® enables pharma companies to perform experiments on a massive scale and generate hundreds of thousands or millions of different cells that they can 'mine' for the rarest cells with the desired characteristics.

Beyond pharmaceuticals, the broader potential of the instrument is phenomenal. Similar cell-based issues occur in veterinary research and even food science. Much of current biology depends upon cell biology and the considerable amount of information obtained through studies at the single cell level. With this in mind, microdroplets as a novel platform for biological chemistry are significant research areas within our research group at the University of Cambridge.

We are currently running a project with Professor Stephen Charnock-Jones, Professor of Reproductive Biology, Department of Obstetrics and Gynaecology at the University of Cambridge, on placental single cell sequencing. This work aims to use single cell RNA sequencing to characterize placental cellular heterogeneity, study the regulation of trophoblasts development and differentiation, and to better understand placenta-related complications in pregnancy and develop effective therapies. To do this, we are producing a method for sequencing non-coding RNA from cells and nuclei, which involves trapping a nucleus in a gel droplet, capturing liberated RNA on the hydrogel matrix, then collecting and processing the gel droplets in an aqueous environment. We then study how the placental cell population changes over time and the mechanisms regulating this heterogeneity.

We have also collaborated extensively with Professor Alison Smith, Head of the Department of Plant Sciences at the University of Cambridge. For example, we have studied algae's potential as a source of lipids. Working on genetically modified algal strains, we devised a method for the high-throughput screening and sorting of microalgae in microdroplets. To identify target strains of algae, especially high in fatty acids, while preserving cell viability to select strains ideal for production.

We are currently only at the tip of the iceberg when it comes to exploring the potential uses of Cyto-Mine®, with many other opportunities in the market such as cell therapy, synthetic biology and genome editing. Notably, because few products are directly comparable to what Sphere Fluidics offer. While other techniques are similar in application, they are not going about the problem in the same way that we are, and this is a real testament to our proprietary technology.

While microdroplets are not yet extensively used, this could change as companies develop more flexible, user-friendly, and inexpensive devices. This is an area of innovation we are continuously exploring at Sphere Fluidics. Expanding on the flexibility and ease-of-use of Cyto-Mine®, it is easy to imagine a laboratory owning one or two instruments, but each research group owning specific chips/cartridges that they can use interchangeably. The standardization of components would then make it easy to manufacture different chips/cartridges for various applications but used on the same instrument. That is a potential market for the company at some stage in the future. Following this trajectory, there is a fascinating future for microdroplet-based technology.