Exclusive insights into the development of our latest microdroplet generator

PiSCES incorporates several novel features to improve monodispersity. Unlike any prior approach, the picodroplet volume can be easily customized at the start of the experiment, enabling users to define their parameters and optimize the instrument for different microfluidic biochips. PiSCES then uses imaging-based feedback and pressure-driven flow to rapidly make picodroplets of the specified volume, while maintaining their monodispersity throughout the run.

A key feature of the design is the imaging system. Imaging each picodroplet after formation supplies an accurate measurement of the picodroplet size and provides active feedback to control picodroplet generation. Together with gas pressure regulators that have faster response times than syringe-based systems, this image-based method enables PiSCES to quickly adjust the input pressures and regulate picodroplet volume during their experiment. 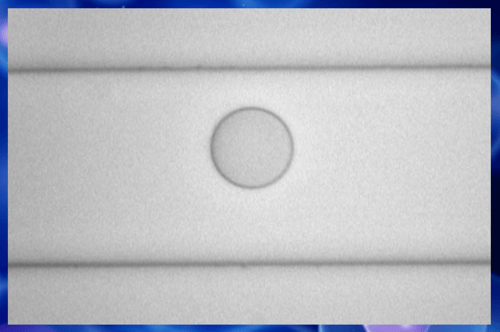 Image of a picodroplet using a 1 microsecond exposure on the new high-speed camera in PiSCES. In this run, the picodroplets were 87 pL in volume and produced at a rate of approximately 2500 drops per second. This image was used for the image-based feedback regulation of the aqueous phase input pressure. Notably, the image has no motion blur and the aqueous drop shows good contrast versus the oil and background.

One great advantage of this feedback-based approach is that any drift from the desired picodroplet volume as well as cell concentration can be quickly corrected. This method will be useful for digital PCR and other picodroplet-based applications, where rapid and quantitative assays are required. For example, the detection and quantification of viral load is a particularly relevant application. PiSCES also provides the ability to regulate sample reagent and emulsion temperature necessary for conducting cell and enzyme-based assays.

In addition to enhanced flexibility and sustained monodispersity, focus is placed on improving the ease of use and repeatability. PiSCES is designed for both users with no microfluidic experience as well as experienced users who need to generate monodisperse and size-controlled emulsion droplets for a range of chemical and biological processes. The consistent monodispersity and visual assurance of the size of the picodroplets enable greater confidence in comparisons between experiments. The gas pressure system also supports the use of much smaller volumes of sample than using syringes, thus reducing reagent amounts and preserving precious samples.

Overall, the vision is to develop a more generalized encapsulation system that can interface with all instruments - akin to pipetting tools, and this prototype is the first step on the way to achieving this. Through continuous development and improvements, it will create a variety of possible future microfluidic device configurations that allow researchers to use picodroplets more flexibly, across multiple different workflows at a reasonable cost. These innovations and further intuitive technologies will help to lower the barrier of entry into this exciting field.