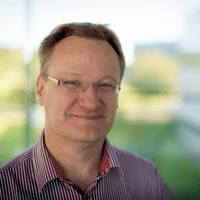 Dr Tristan Vaughan is Vice President of Research and Development, Antibody Discovery and Protein Engineering (ADPE) at AstraZeneca, Cambridge, UK. As a pioneer in the field of antibody-led technology and biopharmaceuticals, Dr Vaughan brings both scientific expertise and industry experience to the scientific advisory board (SAB) at Sphere Fluidics.

In this article, he shares his perspectives on biological medicines development, the potential for single cell analysis platforms in advancing the field and his aspirations for shaping this technology as part of the SAB.

Working at the Forefront of Antibody-led Technology

In the early 1990s, I was fortunate to join a small team of scientists at the newly formed Cambridge Antibody Technology (CAT) that went on to engineer the very first fully human antibody medicine to reach the market. The anti-tumor necrosis factor (TNF)-a antibody that we discovered and engineered became Humira®, the world’s best-selling prescription medicine since 2014 and widely used to treat patients with conditions such as rheumatoid arthritis, psoriasis and Crohn’s disease.

At the time I joined CAT, antibodies were yet to fulfil their promise as therapeutics and published data concerning antibody engineering was scarce, so an entrepreneurial approach was essential. We pushed the boundaries of science to create many variants of our lead anti-TNF-a antibody until we identified a small number of mutations that improved the antibody affinity 1000-fold. CAT was subsequently acquired by AstraZeneca and we have since seen the antibody field rapidly evolve to the point where we have now discovered and engineered around 40 biological medicines that have entered clinical trials, transforming treatment outcomes in a number of serious and life-limiting disease areas.

Another aspect of my work in the early years was the development of the platform ‘phage display’ technology that enabled construction of the first large human antibody library of 1010 different antibodies. The idea of making a human antibody in a test tube was really exciting and our library enabled the rapid isolation of hundreds of different antibodies to any protein for the first time. These libraries were foundational and very robust and to this day still form the starting point for many of the company’s ground-breaking drug discovery projects.

The most rewarding aspect of my role today is meeting the patients, treated with medicines we have helped discover such as Humira®, who are now benefiting from improved health and quality of life. I recall a lady whose arthritis was so debilitating that, at the age of just 32 years, she struggled with daily tasks and couldn't step into the shower without the help of her husband. With treatment, she experienced a rapid improvement in her condition, and was able to shower unaided within a couple of weeks. Today, she takes part in many physical activities, such as skiing and cycling, that she once believed her body would be unable to bear.

Over the years, our ADPE team of around 120 scientists in Cambridge has played a role in the development of other important medicines for the treatment of severe, debilitating diseases such as lupus (Benylsta®), rare blood cancers (Lumoxiti®), non-small cell lung cancer (Imfinzi®) and asthma (Fasenra®). Our primary focus remains the same, to bring new biological medicines to patients as quickly as possible.

During the past 5–10 years, we have witnessed the evolution of antibody-led treatments that enable multiple pathways or antigens to be targeted. Previously, biological therapies were only designed to bind a single target, however, newer bispecific therapeutic antibodies have been engineered that bind two antigens within a cellular pathway, or in two different pathways within the same disease, combining two pharmacologies and thereby increasing the potential efficacy of the drug.

These treatments are making a huge impact in a number of disease areas, particularly in the field of oncology. Immuno-oncology is a rapidly expanding area of focus for most biopharmaceutical companies, who are developing treatments that enable the immune system to effectively recognize and fight tumors, something not previously possible. While not every single patient will respond effectively to these highly focused treatments, they do bring the potential of cure for many.

Gene therapy is also on the cusp of an exciting new era with treatments such as Luxturna®, approved by the FDA in December 2017, which uses an adeno-associated virus-based mechanism to deliver a transgene to the eye. This treatment restores vision in people with inherited retinal dystrophy caused by a mutation within the RPE65 gene. Although this condition only affects a very small population, it is a truly transformative treatment for them and demonstrates the curative potential of this approach, which may pave the way for many more future therapies.

Microfluidic platforms are complex and challenging to develop, requiring a broad range of interdisciplinary skills including expertise in biology, physics, computer software development and drug discovery. Because of this scientific complexity, there is huge opportunity for innovation as this most often occurs at the boundaries and interfaces of scientific disciplines.

Microfluidic platforms will be key to supporting the current focus on artificial intelligence (AI) – driven drug discovery. The application of AI and machine learning within drug discovery will bring phenomenal change and opportunity. Picodroplet microfluidic platforms, such as Sphere Fluidics’ Cyto-Mine® Single Cell Analysis System, have the capacity to drive the generation of extremely large and valuable datasets by enabling the screening and data collection from tens of millions of cells to power machine learning.

These large datasets will allow machines to identify the best solutions in terms of drug design to accelerate biopharmaceutical development and optimize our drugs for the future.

Traditional drug development approaches have always been empirical in nature; making libraries and variants, and then testing them. AI machine learning can make this process more predictive by using microfluidic generated data to learn which amino acid to change, and how best to substitute it. This approach has the potential to significantly improve drug discovery.

Technologies such as Cyto-Mine® can also be used in antibody-based drug discovery to enable large-scale screening of B cells by continuous flow. This platform could be used to optimize the effectiveness of a drug as well, allowing selection of variants with the highest binding affinity.

Further downstream, in the drug development pathway and at the manufacturing stage, microfluidic platforms can be employed to efficiently and rapidly select the most stable cell lines that demonstrate the highest levels of productivity and provide the most homogeneous antibody populations.

Single-cell analysis allows detection of those very rare antibodies or potential drugs with unique properties that are exceptionally hard to find. My experience in drug discovery since the early 1990s all points to the importance of diversity, and Cyto-Mine® is really well placed to explore this effectively. This technology takes screening capability, traditionally conducted through plate-based analysis, to a whole new level via continuous flow. There is huge potential for the instrument in discovering the rarest cells and best antibodies.

I believe that over the next few years we will witness the expansion of gene therapy. We are also seeing some of the first engineered T-cell therapies in clinical practice; chimeric antigen receptor (CAR) T cells. Treatment outcomes with such therapies are remarkable (and potentially curative) for some patients and we need to identify a means of broadening the applicability of such treatments.

The Sphere Fluidics’ Scientific Advisory Board

I am delighted to be involved in the SAB at Sphere Fluidics; to have the opportunity to support colleagues within the Cambridge biotech community and, ultimately, to help science progress. Having joined CAT when it was still a relatively small organization, I realize how daunting many industry-related aspects of the field can appear. It is important that smaller companies have access to external guidance and expertise, so that they can maximize the value of their innovations.

Sphere Fluidics is a company built upon a strong scientific foundation and future, underpinned by the fantastic work of Professor Chris Abell and Professor Wilhelm Huck. Their Babraham site is just five minutes from Granta Park, where I am based, allowing easy face-to-face interactions and facilitating a close working relationship.

I am really enjoying working as part of the SAB, and I believe that I am adding value and helping to shape the direction of the Cyto-Mine® platform; identifying future uses and directions for the technology, providing insights regarding the competitive environment and identifying the potential benefits to drug discovery.

Scientific quality is critical, most biotech companies are keen to emphasize speed, but robust science and rigorous quality are first and foremost. Combining these aspects with scale can be really powerful. Many inventions are, in effect, incremental improvements to an existing technology. This means that you remain dependent upon the utility of the baseline technology to see any success with your own invention. Much more useful and longer-lasting is an invention that is disruptive. However, to develop a technology that is truly disruptive, you must displace what has gone before, and platforms such as Cyto-Mine® have the potential to do this by making plate-based screening obsolete in the future.